US to announce sanctions including ban on new investment in Russia


The US is poised to announce a ban on new investment in Russia while increasing sanctions on the country’s financial institutions, state-owned enterprises and government officials, people familiar with the matter said on Tuesday.

“These measures will degrade key instruments of Russian state power, impose acute and immediate economic harm on Russia, and hold accountable the Russian kleptocracy that funds and supports Putin’s war,” one of the people said, adding that the new sanctions would be unveiled on Wednesday and co-ordinated with the G7 and the EU.

“These measures will be taken in lock step with our allies and partners, demonstrating our resolve and unity in imposing unprecedented costs on Russia for its war against Ukraine,” the person added.

Calls for additional sanctions on Moscow have multiplied in recent days in the wake of mounting evidence of war crimes in Ukraine, including a massacre of civilians in the town of Bucha on the outskirts of the capital Kyiv. The EU this week moved to ban Russian coal and other measures to further reduce its dependence on energy imports from Russia.

The US had already banned new investments in Russia’s energy sector, but the step expected on Wednesday would apply the prohibition across the Russian economy, as part of a package designed to send the country “further down the road of economic, financial, and technological isolation”, said the person familiar with the plan. 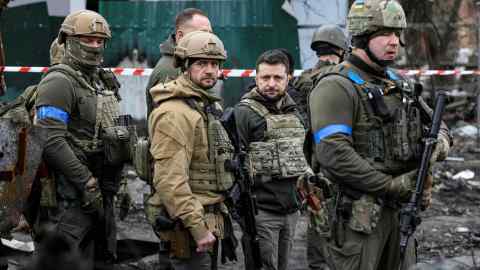 The US and its allies have imposed massive sanctions on Russia since its invasion of Ukraine, including banning any transactions with the Kremlin’s central bank. It is becoming harder to find additional ways to inflict economic punishment on Moscow without risking big negative spillovers for the global economy.

At the same time, the US and the EU are trying to firm up the enforcement of existing sanctions on Russia to limit Moscow’s ability to circumvent the financial punishment by shifting assets to other jurisdictions around the world.

Jake Sullivan, the US national security adviser, on Monday defended the aggressive use of sanctions from criticism that they had failed to stop the war.

“[Sanctions] are a critical tool in ultimately producing a better outcome to this conflict than would otherwise be produced,” he added.

Separately on Tuesday, the US Treasury announced that it was placing sanctions on Hydra, the Russian dark web marketplace, as well as Garantex, a virtual currency exchange that operates largely out of Russia.

Launched in 2015, Hydra is the largest marketplace on the dark web by revenues. It is popular among cyber criminals seeking hacking tools and money laundering services and looking to trade in stolen data and drugs. Treasury said that both Hydra and Garantex were being used by ransomware criminals — many of whom operate out of Russia or Russian-affiliated countries with impunity — to launder millions of dollars of proceeds of their crimes.

Western experts have warned there may be an explosion of financially-motivated cyber crime coming from Russia as existing sanctions bite and hurt the economy.

“The global threat of cyber crime and ransomware that originates in Russia, and the ability of criminal leaders to operate there with impunity, is deeply concerning to the United States,” said Janet Yellen, Treasury secretary. “Our actions send a message today to criminals that you cannot hide on the darknet or their forums, and you cannot hide in Russia or anywhere else in the world.”

In early 2017, I was chastised by my manager for not smiling as much as I used to...

British and EU officials have agreed to meet for the first time in months to discuss how to...

Christopher Bouzy is trying to stay ahead of the bots. As the person behind Bot Sentinel, a popular...

Sparrow Health System plans to lay off hundreds of workers after recording a $90 million loss during the...

The FBI seemingly misled a federal magistrate judge to obtain a warrant that let it seize the contents...

Ohio is best known for being home to...

The Porsche IPO is set to be one...
- Advertisement -

British and EU officials have agreed to meet...
Economy

Inflation in the euro area hit a new...
Economy

US chipmaker Micron will receive up to $320mn...

British and EU officials have agreed to meet...
Technology

Christopher Bouzy is trying to stay ahead of...
Healthcare

The developer hopes to fill a housing need...
World

There's no denying that much of what the...
Load more