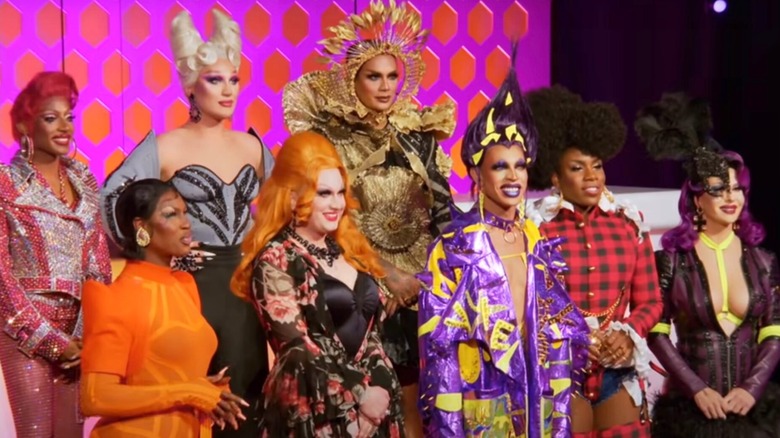 Condragulations queens — the trailer for “RuPaul‘s Drag Race All Stars Season 7″ has dropped, and things couldn’t be more infused with “charisma, uniqueness, nerve, and talent.” During the season 14 finale of “RuPaul’s Drag Race,” audiences got a glimpse of the upcoming “All Stars” competition, which sees eight previous Drag Race queens returning for another chance to snatch the crown. This time around, however, the “All Star” cast comprises winners: namely Jaida Essence Hall, Jinkx Monsoon, Monét X Change, Trinity The Tuck, Raja, Shea Couleé, The Vivienne, and Yvie Oddly.

Check out the star-studded trailer below. May the best queen win.

An Array Of Show Stopping Performances

The “All Stars” season 7 cast will be competing for the coveted “Queen of all Queens” title, along with a cash prize of $200,000 — the highest in the franchise so far. Of course, the cast doesn’t include every single “Drag Race” winner in herstory, which could potentially mean some surprizing guest stars — and that upcoming “All Stars” seasons could feature other beloved former winners like Trixie Mattel and Violet Chachki.

While every season of “All Stars” follows a different format, contestants are generally expected to turn out their best looks on the runway and show off their superstar quality in group challenges. Of course,  a lip-sync battle can be expected each episode (although the nature of the face-off keeps changing almost every season), which are usually high-octane performances replete with various kinds of wig and costume reveals.

The excitement does not end here, as there’s also “Untucked”: the show’s companion series. It captures the behind-the-scenes drama between the contestants, filled with confessions, heart-to-hearts, iconic “reads,” and sometimes, serious fights. Furthermore, the best competitions are incomplete without celebrity guest stars, and this season will feature none other than supermodel Naomi Campbell, who will judge the queens’ looks, along with their runway walks. Other prominent guests include Cameron Diaz, Nancy Pelosi, Ronan Farrow, Daphne Guinness, Kirby Howell-Baptiste, Jeffrey Bowyer-Chapman, Nikki Glaser, Tove Lo, Betsey Johnson, Janicza Bravo, Ben Platt, Hannah Einbinder, and Vanna White.

The trailer offers a glimpse into emotional moments, individual strategies to win the competition, and of course, humor, that fans have to look forward to.

However, there’s more: a four-episode special will be aired before the premiere, featuring eight beloved drag queens reacting to “RuPaul’s Drag Race” clips of the contestants returning for “All Stars” season 7 (hoping that Katya will be on this, her reads are always phenomenal). These special episodes will be available courtesy of World of Wonder, and has been titled “Countdown to All Stars 7: You’re A Winner Baby,” which will air on April 29, 2022, on VH1 and the “Drag Race” YouTube Channel.

Read this next: 14 Remakes That Are Better Than The Original

Part of the fun of "Blood Relatives" is...
Entertainment

Does Zac Efron Owe Us The Truth? | Perez Hilton

View gallery Ime Udoka, 45, is not only the...
Entertainment

James Earl Jones Has Stepped Away From Voicing Darth Vader

Respeecher is the same company that was behind...

This is Amazon’s next big streaming bet