Boris Johnson has vowed that he will not retreat on his green agenda in spite of claims by parts of the Conservative party that the cost of developing renewable energy is driving up electricity bills.

The UK prime minister, while on a trip to India, said the government was tackling the cost of living crisis and insisted that Rishi Sunak, the under-fire chancellor, would still be in his job to deliver a crucial Budget in the autumn.

But Johnson rejected calls from some Tory MPs that he should scrap the “green levy” on electricity bills to help households immediately, as the squeeze on living standards intensifies. “I want to do everything we can to alleviate the cost of living,” he said on Thursday. “But there’s a lot of prejudice against the green agenda.”

The so-called green levy is made up of several taxes used to help fund investment in low-carbon generation, including nuclear and wind farms, and paying energy companies to insulate homes for poorer households.

Oliver Dowden, Tory chair, recently denounced “net zero dogma” while Conservative MPs and peers in the “Net Zero Scrutiny Group” have called for the scrapping of the green levy from consumer bills.

The Daily Telegraph reported on Monday that government officials were considering whether to scrap the levy.

But Johnson insisted: “Actually green technology, green, sustainable electricity can help to reduce bills. Overall, if you look at what we have done with renewables it has helped to reduce bills over the last few years and will continue to do so.”

Johnson’s allies say the prime minister has no intention of removing the green levy, arguing that the money would have to be found elsewhere, probably from general taxation.

Electricity bills for most households jumped in April when the government’s energy cap increased 54 per cent to nearly £2,000. The levy currently makes up £153 of that figure.

The main reason for the jump in bills, which are set to rise further in October by another estimated £600 when the cap is again increased, is the spiralling global wholesale price of gas, accentuated by Russia’s invasion of Ukraine.

The green levy is designed to subsidise a shift towards low-carbon, homegrown sources of power, which are less vulnerable to geopolitical events, according to the government.

However, energy company chiefs have suggested shifting the levy to general taxation as one way to help hard-pressed households, along with cutting VAT on energy and increasing the “warm homes discount” for people on low incomes.

In February, Sunak announced a package of council tax rebates and loans to help households, but has since acknowledged that this may need beefing up in the autumn.

Johnson, asked whether the government would wait until then before launching a new package to help struggling households, said: “We’ll do whatever we can to help.” 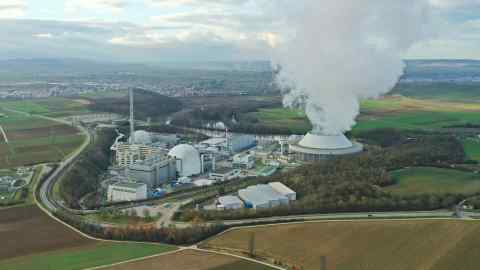 The prime minister tried to quell rumours that he could sack Sunak in a summer reshuffle, following criticism of the chancellor’s Spring Statement and a subsequent row over his wife’s tax arrangements.

Asked whether Sunak would deliver the autumn Budget, Johnson replied: “The answer to that is yes.”

The chancellor, on a visit to Washington, refused on Friday to say whether he considered resigning after being issued with a police fine over the partygate affair.

Meanwhile, Johnson declined to say whether he could offer the same job guarantee to other cabinet members, including Priti Patel, the home secretary, who has been criticised in the past for her handling of cross-channel migration.

Johnson said Patel’s policy to ship migrants to Rwanda to have their asylum claims processed was “a sensible, brave and original policy. I think Priti has come up with something that is extremely difficult to pull off. I think she has done an outstanding job.”

Are you curious about the FT’s environmental sustainability commitments? Find out more about our science-based targets here

For the second year in a row, Arrow Electronics employees in the United Kingdom raised funds for Martin...

Arizona Republican Senate candidate Blake Masters has been condemned by 75 of his classmates, teachers,...

The trailer begins with Velma typing on her phone (and I quote from her screen): "Dear HBO Max,...

Top officials at the Federal Reserve on Thursday...
Economy

The trailer begins with Velma typing on her...
Business

Lido has around 40% of all the staked...
Economy