Boris Johnson has admitted the government “can do more” to help families struggling with rising bills, but warned that a big new support package risked driving up inflation and interest rates.

The prime minister, speaking two days before a UK-wide round of local elections, said the government had to be “prudent” and that high levels of extra public spending could lead to “an inflationary spiral”.

Tory strategists admit that the cost of living is by far the greatest issue for voters ahead of Thursday’s polls and claim the party is on course to lose hundreds of seats.

Labour argue that this is expectation management and that actual Tory losses will be on a more modest scale, partly because Labour did well when most of the same council seats were contested in 2018.

Johnson, speaking to ITV’s Good Morning Britain for the first time in almost five years, apologised again for breaking the law in the partygate affair. Asked in a robust interview whether he was honest, he replied: “Yes.”

The prime minister again rejected calls from Labour and the Liberal Democrats for a windfall tax on North Sea oil and gas companies to help fund more support for low income households.

He insisted the government was already doing a “huge amount” to help people with rising energy bills, but he repeated the warning of Rishi Sunak, chancellor, of the dangers of a big new injection of support.

“If we have an inflationary spiral of the kind that could be triggered, you will see interest rates going up,” he said. Johnson added that would create “an even bigger problem” and feed through to higher mortgage costs.

But he accepted that a £9bn package of support announced by Sunak in his Spring Statement six weeks ago was “not going to be enough immediately to cover everybody’s costs”. More support is expected in the autumn.

Labour insists Johnson is out of touch with ordinary voters, and the prime minister was confronted in the interview with the experience of viewers facing severe hardship.

Asked about a pensioner called Elsie who travelled on buses all day because she could not afford to heat her house, Johnson replied that as London mayor he introduced “the 24-hour Freedom bus pass”.

Starmer was asked on the BBC’s Radio 4 Today programme whether the force had made contact with either him or his office in recent days.

Instead of answering the question, the Labour leader said the Durham Police had already come to the “clear conclusion” months ago that no rules had been broken.

“We were working in the office, it was just before elections, we were busy, we paused for food, no party, no rules were broken, that is the long and the short of it,” he said. 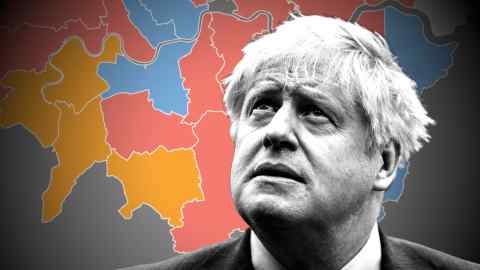 Starmer is facing growing questions over an event in Durham in April last year at which he was photographed through a window drinking beer.

At the time indoor socialising was banned. The Labour leader has said that he was working that day at Durham Miners Hall as part of a campaign visit and stopped for food before resuming his work.

A Labour official said: “I would just refer you to Durham Police’s statement that they haven’t reopened the investigation so self-evidently they haven’t been in touch.”

Starmer said that Labour had the “wind in our sails” ahead of Thursday’s local elections. “We are in a position where we are just ahead in the polls. That is remarkable in two years,” he said.

Starmer repeated Labour’s case for a windfall tax on energy companies after BP announced soaring profits for the first quarter on Monday morning. He also supported the Conservative government’s decision to send another £300mn of military equipment to Ukraine.

After the 11 Circuit overturned her ruling for...

Airbus has backed itself to meet its target...
- Advertisement -

Executives at publicly traded US companies are becoming...
Economy

The UK, says Kwasi Kwarteng, chancellor of the...

CommonSpirit Health loses near $2B in 2022

NASA’s Artemis I launch faces a new obstacle: the weather