US moves towards imposing sanctions on Chinese tech group Hikvision


The US is moving towards imposing hard-hitting sanctions on Hikvision, the Chinese surveillance camera company accused of enabling human rights abuses, in a move that would affect cities from New York and London to Singapore.

The Biden administration is laying the groundwork to place human rights-related sanctions on Hikvision, according to four people familiar with the internal discussions. While a final decision has not been taken, the White House wants to target the company in what would amount to the first time the US has imposed such sanctions on a big Chinese technology group.

The move would have far-reaching consequences because companies and governments that deal with Hikvision, the world’s largest manufacturer of surveillance equipment, would risk violating US sanctions.

Two people familiar with the situation said the administration had started briefing allies on its intentions because any measures would have ramifications for the more than 180 countries that use the company’s cameras.

According to Top10VPN, a tech research company, more than 1,000 cities use Hikvision cameras. The company’s top five international markets are Vietnam, the US, Mexico, the UK and Brazil.

“If enacted these sanctions are a seismic development,” said Sophie Richardson, China director at Human Rights Watch. “We have long called for surveillance technologies to be regulated so that they aren’t deployed by abusive governments. Our research shows that Beijing’s tech-enhanced repression extends both inside and outside China.”

The White House and the US Treasury, which would impose the sanctions, did not comment.

Washington has accused the Hangzhou-based company of supplying the Chinese government with surveillance cameras that facilitate the repression of 1mn Uyghurs who have been detained in camps in the north-western region of Xinjiang.

The Biden administration has followed the Trump administration in accusing Beijing of committing “genocide”. China has denied that it is persecuting Uyghurs in the region.

Congress passed the Global Magnitsky Act in 2016, giving the government more power to impose sanctions on entities involved in human rights abuses. The Treasury is responsible for putting companies that run afoul of the law on the Specially Designated Nationals And Blocked Persons list.

US national security officials are also concerned that China could use Hikvision’s cameras around the world to engage in spying activities.

“Adding Hikvision to the SDN list would be a strong manoeuvre against Beijing’s digital authoritarian agenda and an escalatory signal that the US government is now willing to employ sanctions against Chinese companies,” said Eric Sayers, senior vice-president at consultancy Beacon Global Strategies, who supports targeting Hikvision.

“It could cost billions if governments and companies have to slowly rip and replace old Hikvision products that can no longer be repaired. It will also take years for trusted surveillance equipment vendors . . . to meet exploding demand,” he said.

The costs underscored why it was “so challenging for democracies to initiate these types of defensive measures even when they are in our national interest or good human rights policy”.

Former president Donald Trump put Hikvision on the commerce department’s “entity list” in 2020, which barred it from securing US technology made in America. 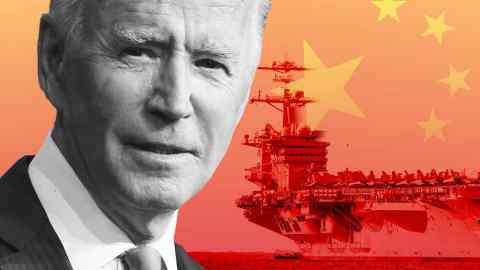 The Biden administration last year put the company and several other groups on the “Chinese military-industrial complex companies” list, which prohibits Americans from investing in the businesses. It has also targeted DJI, the Shenzhen-based group that is the world’s largest maker of commercial drones, and SenseTime, a Chinese artificial intelligence company that specialises in facial recognition software.

The Financial Times reported last week that the administration was examining claims that YMTC, a Chinese semiconductor manufacturer that the White House said was emerging as a national champion, had breached export control restrictions by supplying telecoms company Huawei with memory chips that were made using US technology.

US secretary of state Antony Blinken will on Thursday deliver the first big speech on China since the start of the Biden administration. Blinken was the first Biden official to agree with the Trump administration that the Chinese treatment of Uyghurs in Xinjiang amounted to “genocide”.

It's springtime on Mars and the mysterious polygons are in bloom, a new image from the orbiting High...

A Step-by-Step Guide on How to Rent an Apartment

Finding your ideal apartment rental, whether moving out of a dorm or leaving your parent’s house, can be daunting...

How The Thing Crew Created That Unmistakable Title Sequence

This is an awesome and indelible image, one that modern viewers might assume was made by CGI. After...

Amazon to commit $23M for affordable housing projects in Seattle

Brenda McKinley has been selling homes in Ontario...
Economy

A consortium of Chinese state banks has lent...

It's springtime on Mars and the mysterious polygons...
Real Estate

A Step-by-Step Guide on How to Rent an Apartment

Finding your ideal apartment rental, whether moving out of...
World

How The Thing Crew Created That Unmistakable Title Sequence

This is an awesome and indelible image, one...
Business

Smoke rises after a military strike on a...
Cryptocurrency

Research: 67 separate ransomware attacks impacted 954 US schools and colleges in 2021, costing schools an estimated $3.5B+ in downtime (Paul Bischoff/Comparitech)

An Apple Store Votes to Unionize for the First Time

Research: 67 separate ransomware attacks impacted 954 US schools and colleges in 2021, costing schools an estimated $3.5B+ in downtime (Paul Bischoff/Comparitech)