Mother’s Day ended on a high note, thanks to Kendrick Lamar. The 34-year-old Pulitzer Prize-winning rapper dropped “The Heart Part 5” in the later hours of May 8, days before he’s set to release Mr. Morale & the Big Steppers, his first new album in five years. In “The Heart Part 5,” Kendrick starts with a message – “I am all of us” – which becomes even more evident as the video progresses, as Kendrick’s face morphs into OJ Simpson, Kanye West, Jussie Smollett, Will Smith, Kobe Bryant, and Nipsey Hussle.

“I come from a generation of pain, where murder is minor,” Kendrick raps at the start of the song, and each deepfake correlates with a line in the track. Kendrick morphs into OJ when interpolating a line from a Jay-Z song (Jay-Z famously wrote “The Story of OJ,” off 4:44), and he takes on Ye’s visage at the mention of “friends bipolar.” Towards the end of “The Heart Part 5,” Kendrick adopts Kobe’s image before shifting into Nispey’s face while seemingly adopting the slain rapper’s perspective.

“But didn’t change me starin’ down the barrel of that gun / Should I feel resentful I didn’t see my full potential? / Should I feel regret about the good that I was into? / Everything is everything, this ain’t coincidental,” raps Kendrick, per Genius.

Kendrick Lamar: See Photos Of The Rapper In Concert & More 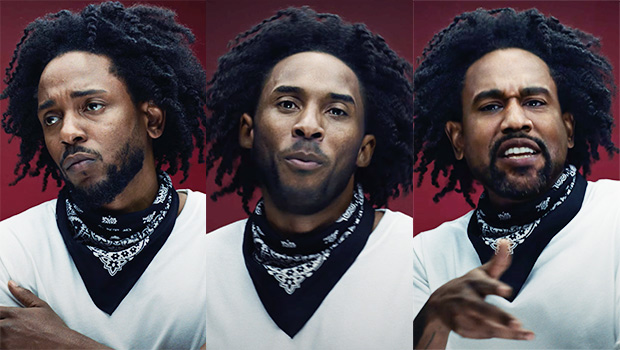 The video contains a special thanks to South Park creators Matt Stone and Trey Parker and their Deep Voodoo studio. Kendrick, Matt, Trey, and Dave Free (the co-director of “The Heart Part 5” video) are reportedly working on a film that “will depict the past and present coming to a head when a young [B]lack man who is interning as a slave reenactor at a living history museum discovers that his white girlfriend’s ancestors once owned his,” per Pitchfork.

Kendrick’s new song is the latest in his long-running “The Heart” series of non-album singles that first began in 2010. It’s unclear if it will be included in Mr. Morale & The Big Steppers, Kendrick’s new album slated for a May 13 release. The album could be more than just a follow-up to 2017’s DAMN. On May 3, Kendrick uploaded a photo to his website where he held two CDs and a book. One CD bore “Steppers” while the other was labeled “Morale.” Each CD was also labeled “Master Copy,” hinting that this project could be a double album. Also – the book in Kendrick’s hand was titled Mr. Morale & The Big Steppers, with Lamar as the listed author. This sparked speculation that Kendrick could be dropping a book along with new music.

Shannade Clermont: 5 Things To know About Woman, 28, Spotted Out With Kanye West

The 4 most surprising takeaways from Google’s I/O conference

Google opened its I/O developer conference with a grab-bag of a keynote. Over two hours Wednesday, a cast...

Good morning. This article is an on-site version of our FirstFT newsletter. Sign up to our Asia, Europe/Africa...

Good morning. This article is an on-site version...

Could birth control be at risk if Roe is overturned? : NPR

Ethereum gained bearish momentum below $2,000 against the...
Economy

Buying a house can be an exciting yet...
World

Is it a good time to buy a home? No, most Americans say