‘Mind-boggling’ scrambled genome found in octopus and squid. It could explain their smarts. 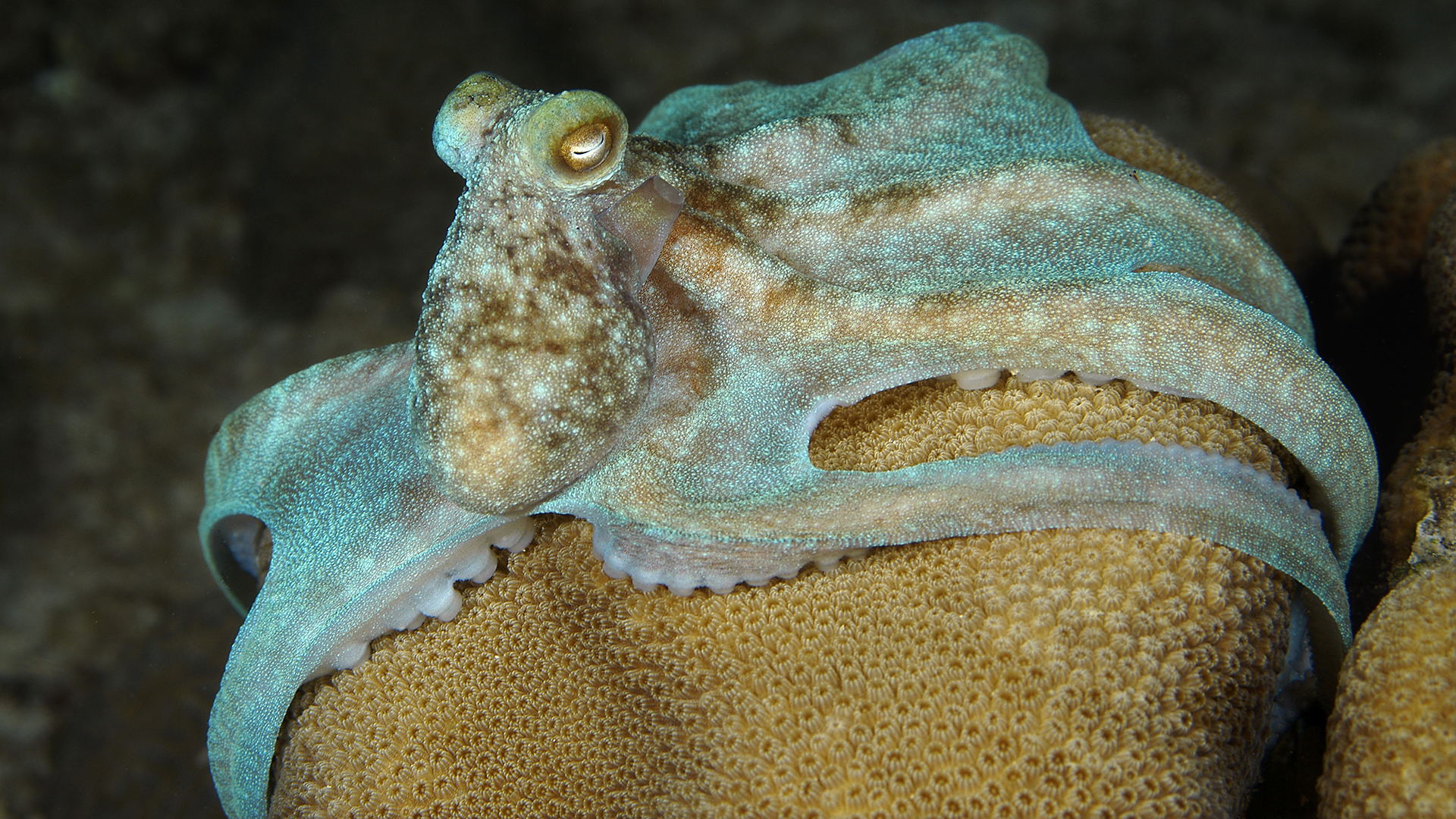 Squid, octopus and cuttlefish have scrambled-up genomes that may help explain how these cephalopods evolved the most complicated nervous systems of any invertebrate.

New genetic sequencing reveals that these animals’ genes are mixed up, arranged in strange orders not seen in other, non-cephalopod species. This DNA mixing and matching may have given evolution a new sandbox to play in, study co-author Caroline Albertin, a biologist at the University of Chicago Marine Biological Laboratory, told Live Science.

“A hypothesis is that these new gene arrangements resulted in new expression patterns and that means these genes could be used in a new place or in a new way,” Albertin said, referring to the process of a gene being “expressed” or activated to create proteins that do some type of work in the body.

Those new opportunities, in turn, could explain some of squid and octopuses’ incredible abilities, such as advanced vision or arms that have their own “brains.”

Scientists have long suspected that strange things are going on in the cephalopod genome. In 2015, when Albertin and her colleagues sequenced the  first octopus genome, they expected to see a pattern of genetic evolution similar to many vertebrates: duplication. During the long history of life on Earth, all vertebrates with jaws have copied their genomes twice, meaning that mammals, birds, fish, amphibians and sharks have all accumulated four copies of the original genome. Some of those copied genes have since been lost, but many have been borrowed by evolution to take on new roles.

“It opens up a whole genomic playground for evolution to act on,” Albertin said. “[M]aybe one of those four genes can go off and start to do something else.”

It stood to reason that cephalopod evolution involved the same duplication process. But when they started to dig into the octopus genome,, Albertin and her colleagues found no evidence that cephalopods had done this genetic copy-paste. Now, the team has gone deeper, using next-generation sequencing technologies to piece together chromosome-level readouts of two squids — the Hawaiian bobtail squid (Euprymna scolopes) and the longfin inshore squid (Doryteuthis pealeii) — and one octopus — the California two-spot octopus (Octopus biamaculoides).

In papers published in the journal Nature Communications on April 21 and May 4, the researchers used three different genome sequencing methods to decode the genomes, including state-of-the-art long-read sequencing that can read out thousands of DNA base-pairs at one time. (The rungs of the ladder-like molecule of DNA are made up of pairs of nitrogen bases.)  If the genome were a book, or, more accurately, a very long series of books — the Hawaiian bobtail squid has 5.5 billion base-pairs in its genome — long-read sequencing lets scientists read pages instead of paragraphs, Albertin said.

The results showed that cephalopods’ genomes have been churned and scrambled. Albertin’s study co-authors ​Hannah Schmidbaur and Oleg Simakov of the University of Vienna and their colleagues compared the cephalopod genes to thousands of similar genes found across a wide array of animal species. They found 505 blocks of three or more genes that co-occurred in the squids and octopus but were not found together in other animals. If genes A, B and C are typically found close together on Chromosome 5 in snails and fish and fruit flies, for example, they’ll often be scattered across three separate chromosomes in cephalopods.

The finding is “mind-boggling,” Albertin said, because gene order usually stays the same, even among species that are far apart on the evolutionary tree.

“That, to evolutionary biologists, suggests there is a reason you keep that gene order,” she said. “And cephalopods seem to be breaking these rules.”

It’s not clear how the cephalopods pulled off this genetic disobedience. The gene-scrambling took place over many generations of cephalopods and hundreds of millions of years, Albertin said, and it may have relied on “jumping genes,” also known as transposable elements, which are DNA sequences that can hop around the genome.

The researchers examined which genes were active in cephalopod tissues and found that many of the unique cephalopod gene groupings were busy in the nervous tissue, hinting that these special sequences could have played a role in the evolution of cephalopod smarts.

“This is really pointing to an exciting new perspective on how novel features arise in evolution,” Albertin said.

Of all the movies I watched at the Sundance Film Festival this year, the one that...

A new Froedtert & the Medical College of Wisconsin (Milwaukee) microhospital opened in Mequon, Wis., according to an...

Snap didn’t make enough Pixy drones, but won’t say how many it made

Prehistoric people may have used firelight to create...
Science

Recovering from an injury is somewhat of an...
Science

Cardano (ADA) pared a big portion of the...
Economy

Of all the movies I watched...
Healthcare

A new Froedtert & the Medical College of...
Politics

The show's interpretation of Blackness is limited in...
Load more

50 years ago, scientists had hints of a planet beyond Pluto

Baby marmosets may practice their first distinctive cries in the womb