The European Central Bank’s chief economist has said quarter-percentage point interest rate rises in July and September will be its “benchmark pace”, rebuffing calls for a bigger increase to end its negative rate policy instantly this summer.

Economists said the ECB was likely to face rising pressure to ditch its ultra-loose monetary policy more quickly after inflation in Germany soared to a record high of 8.7 per cent in May. But its chief economist Philip Lane said the process of removing its stimulus “should be gradual”.

“Normalisation [of monetary policy] has a natural focus on moving in units of 25 basis points, so increases of 25 basis points in the July and September meetings are a benchmark pace,” he told Spanish business newspaper Cinco Días.

Lane was more specific than ECB president Christine Lagarde, who last week signalled for the first time a clear plan to end its eight-year experiment with negative rates by saying borrowing costs were on track to hit zero by the end of September.

The ECB’s deposit rate is minus 0.5 per cent and has been in negative territory since 2014, when the region faced a sovereign debt crisis. Most of its policymakers agree on the need to start raising rates, but there are divisions over the pace of the move.

Economists said Lane’s comments on Monday were an attempt to quash calls by more hawkish members of the ECB’s governing council for it to follow the lead of the US Federal Reserve by raising rates at a more aggressive pace of half a percentage point at a time.

“The only explanation I can come up with is that this is indeed a desperate attempt by Lane (and Lagarde) to take back control of the discussion and to prevent a 50-basis point rise in July,” said Carsten Brzeski, global head of macro research at ING.

Austria’s central bank governor Robert Holzmann, one of the most hawkish members of the ECB governing council, said last week it should raise rates by half a percentage point in July as “everything else risks being seen as soft”.

But ECB executive board member Fabio Panetta warned that “signs of economic stress are emerging in the hard data — signs which may become more visible in the coming months”. In that context, pre-committing to change policy “seems unnecessary and unwise”, he added.

Data published on Monday showed annual inflation in Germany hit a new all-time high of 8.7 per cent in May, driven by a 38.3 per cent rise in energy prices and an 11.1 per cent jump in food prices. Spanish inflation also rose faster than expected in May to 8.5 per cent.

The German government has announced measures to cushion the impact of inflation, including a cut in fuel duty, discounted train tickets and one-off payments to taxpayers and benefit claimants.

Michael Holstein, chief economist at DZ Bank, said: “The danger remains, however, that the decline in real household income will also lead to a further economic downturn.”

Eurozone inflation has consistently risen faster than the ECB expected and economists are forecasting it will hit a new high of 7.7 per cent when figures for May are published on Tuesday — nearly quadruple the ECB’s 2 per cent target.

The ECB will issue new forecasts after its meeting next week in Amsterdam, when it is expected to lift its inflation expectations and lower its predictions for growth. 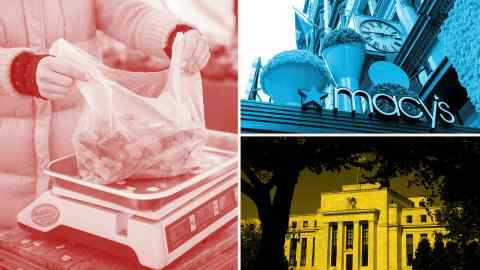 Despite the continued surge in inflation, the ECB is likely to keep rates on hold next week, while announcing plans to stop buying more bonds at the start of July.

Lane said any further ECB rate rises after September would depend on how the economy performs.

“This debate will continue in the autumn and at that point we’ll have more information and will know more about the dynamic of inflation and second-round effects on wages,” he said.

Lex Hoogduin, a professor at the University of Groningen and a former board member of the Dutch central bank, tweeted that by only “reluctantly raising interest rates to zero” the ECB was “taking a very big risk”.

OMG, these January 6 committee hearings are turning out to be the political equivalent of digging for gold...

AstroAccess, a nonprofit that promotes disability inclusion in space, has partnered with the Aurelia Institute to advance astronaut...

This is an opinion editorial by Matthew Mezinskis, creator of the “Crypto Voices” podcast and Porkopolis Economics.Take a...

This article is an onsite version of our Europe Express newsletter. Sign up here to get the newsletter...

Paramount Pictures has been trying to make a...

This article is an onsite version of our...
Economy

UK consumer confidence has fallen to its lowest...
Economy

Government bond markets rallied on Thursday after a...
Economy

Support among top US Federal Reserve officials is...

AstroAccess, a nonprofit that promotes disability inclusion in...
Cryptocurrency

This is an opinion editorial by Matthew Mezinskis,...
Economy

In hearings this week, the notorious spyware vendor...
Healthcare

"Polio Season Already! I Haven't Taken Down My Monkey Pox Decorations Yet."

From commenter IB_Joe at InstaPundit, about the "Poliovirus...
Science

This giant bacterium is the largest one found yet

Cryptocurrency is changing how we think about money,...
World

The average score for the Juneteenth quiz is 5.3. Think you can do better?

The dangers for the eurozone are all too real