Janet Yellen has denied claims she wanted US President Joe Biden to scale back the size of his $1.9bn Covid stimulus package last year over fears it could stoke inflation.

The US Treasury secretary issued a statement on Saturday rebutting claims made in a forthcoming book that she initially wanted to trim the bill by a third.

The book threatens to give ammunition to Biden’s critics, who accuse him of having helped unleash the highest US inflation in decades with large spending bills in the opening months of his administration.

Yellen said in her statement: “I never urged adoption of a smaller American Rescue Plan package, and I believe that ARP played a central role in driving strong growth throughout 2021 and afterwards.”

She issued her statement after excerpts from the book alleged she initially agreed with Larry Summers, one of her predecessors at the Treasury, that the president’s signature economic measures were going to push up prices. 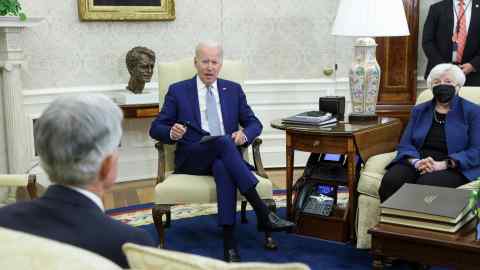 According to reports, Owen Ullmann states in Empathy Economics, his new biography of Yellen: “Privately, Yellen agreed with Summers that too much government money was flowing into the economy too quickly.” His publisher PublicAffairs claimed Ullmann had “unfiltered access” to the Treasury secretary while researching the book.

Inflation has soared for much of 2021 and the early part of 2022. Core inflation was 4.9 per cent in April compared with the previous year, according to the Federal Reserve’s preferred personal consumption expenditures price index. It hit 5.3 per cent the previous month on an annualised basis.

High prices have taken a heavy political toll on Biden, whose approval rating is languishing around 40 per cent, even as the jobs market continues its steady recovery from the Covid-19 lows.

The president’s critics have accused him of ignoring the warnings of people such as Summers, who said last year the bumper Covid relief and bipartisan infrastructure bills would add fuel to an already overheating economy.

Last week Yellen said she had been wrong last year about the likely path inflation would take. She told CNN: “There have been unanticipated and large shocks to the economy that have boosted energy and food prices and supply bottlenecks that have affected our economy badly that I didn’t — at the time — didn’t fully understand, but we recognise that now.”

Meanwhile Biden has been at pains in recent weeks to show that he considers tackling high prices his number one concern. Last week he wrote an article for the Wall Street Journal saying he realised Americans were “anxious” about high inflation. He has also given his public backing to Jay Powell, the Fed chair, to do anything he thinks necessary to curb rising costs.

Last month the Fed raised its benchmark interest rate by half a percentage point for the first time since 2000 and signalled it would do the same at the next two meetings.

12 best academic planners for students in 2022

Ethereum Price Broke Past $1,800 Despite Higher Demand At Lower Levels

Tidbyt review: a fun desk accessory in need of a purpose