Online used car seller Cazoo has become one of the first British businesses to warn over the threat of recession as it announced plans to slash hundreds of jobs to protect its cash in preparation for a downturn.

Cazoo warned that it faced a combination of high inflation, supply chain disruption and rising interest rates, which would force it to cut about 750 jobs and freeze cash-consuming investment projects.

“This perfect storm has placed cash conservation top of mind for the company, ahead of growth” said Alex Chesterman, founder of Cazoo and former boss of property website Zoopla.

Lossmaking Cazoo operates in the UK and across Europe but was floated in the US last year through a special purpose acquisition company at the peak of the tech listing boom.

Shares in the group have since fallen more than four-fifths since listing in August in a deal that valued the then 2-year-old start-up at about £6bn. The company employs more than 3,500 people across the UK, Germany, France and Portugal.

The company said on Tuesday that it expected to achieve cash flow break-even point in the UK by the end of 2023, and it would seek to manage costs and expenditure to become self-funding in the UK.

Consumer-facing companies such as Cazoo are likely to be hard hit by any recession ushered in by the cost of living crisis. The Bank of England warned over the threat of recession last month owing to energy costs that have sent inflation to a 40-year high.

To combat this, policymakers have started to raise interest rates, but this is set to squeeze household incomes further and hit demand for discretionary purchases such as new cars.

On Tuesday, the S&P Global/CIPS Purchasing Managers’ Index — spanning services and manufacturing firms — showed that growth in British businesses had slowed in May to its weakest since February 2021.

Cazoo said that it was “not immune to the rapid shift in the global economy and the possibility of a recession in the coming months”, which would force it to cut back costly parts of its business.

“The combination of rising inflation and interest rates with supply chain issues caused by the pandemic and war has driven up the cost of living and hit consumer confidence,” said Chesterman. 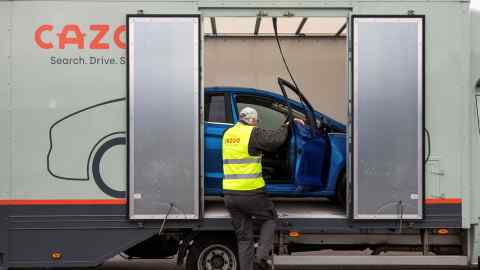 Cazoo said that its restructuring efforts would cut costs by about £200mn, and extend its cash levels beyond 2023. The company expects sales and revenues to more than double in 2022, with the latter reaching up to £1.5bn.

Cazoo will no longer offer its subscription service to new customers from the end of June, it added, given the “highly cash consumptive nature” of this model.

The company had cash and cash equivalents of more than £400mn as of May 31, 2022 in addition to self-financed inventory of over £200mn

Bitcoin Steady Above $20K After Drop To $17K

After a weekend in which Bitcoin (BTC) experienced realized losses to the tune of $7.3 billion, the largest cryptocurrency...

In China, pork prices determine inflation rates. The meat is a local staple and has the largest weighting...

Nothing confirms phone (1) will not be available widely in the US and might not work well on some carriers, as it focuses on...

Sascha Segan / PCMag: Nothing confirms phone (1) will not be available widely in the US and might...

Amazon warehouse problems: Running out of workers to hire, and too much space

David Cronenberg Sees A Deeper Meaning Behind His Body Horror

President Joe Biden on Tuesday hit out at...

Bitcoin Steady Above $20K After Drop To $17K

After a weekend in which Bitcoin (BTC) experienced...
Economy

Nothing confirms phone (1) will not be available widely in the US and might not work well on some carriers, as it focuses on...

Physicians and their employers are working to get...
Politics

Is This Podcast Sentient?

This episode of the Cyberlaw Podcast begins by...
Science

Few pieces of exercise equipment can give you...
Real Estate

An Apple Store Votes to Unionize for the First Time

The Power and Pitfalls of AI for US Intelligence