Investors are on alert for Pakistan to follow Sri Lanka into default as the south Asian country struggles with soaring commodity prices and tighter credit conditions.

Pakistan’s foreign bonds due to mature in 2024, 2025 and 2026 are trading firmly in distressed territory, at about 71, 65 and 63 cents on the dollar, respectively, according to Bloomberg data.

The country’s debt has been among the worst performing this year of any issued by emerging market countries, signalling investors’ concerns over the pressures weighing on the developing economy.

The surge in global energy and food prices since Russia’s invasion of Ukraine in February has fed inflation and caused Pakistan’s trade deficit to widen, draining its reserves. With its foreign exchange reserves dwindling to about $9bn, enough to last another two months, a liquidity crisis is looming.

“Going into the Ukraine crisis, Pakistan wasn’t in a good place to start with,” said Gareth Leather, senior economist at Capital Economics. “The explosion in commodity prices has led to a rapid deterioration in its current account and rising government spending.”

The discount on the country’s bonds remains smaller than for other emerging markets. This is due to expectations that an IMF bailout coupled with bilateral financing support may help Pakistan avert a default this year.

Ghana, which as with Pakistan is contending with spiralling prices and is seeking help from the IMF, has bonds maturing in 2026 trading at roughly 68 cents on the dollar. Those of Sri Lanka, which defaulted in May, are trading at about 32 cents.

Even so, in a sign of investors losing faith in Pakistan’s economy, the rupee has tumbled more than 15 per cent against the dollar over the past three months, although it has come off a recent low of Rs240 last week to trade at about Rs224.

The three big credit rating agencies — Fitch, Moody’s and S&P — have all downgraded Pakistan’s outlook to negative in recent weeks. Its credit ratings are deep in non-investment grade, or “junk”, territory.

Some market participants have endorsed the view of Pakistani officials that allies including the US, China, and Arab countries will help keep it afloat by offering financial support, deeming the nuclear-armed state’s economy too regionally important to fail.

The IMF is set to hold a board meeting in late August to discuss approving a $1.2bn disbursement to Pakistan, “once adequate financing assurances are confirmed”, the body’s resident representative in Pakistan Esther Perez Ruiz said last week.

Murtaza Syed, Pakistan’s acting central bank governor, told the Financial Times in late July that the country was in talks with countries including China and Saudi Arabia to shore up additional financing. 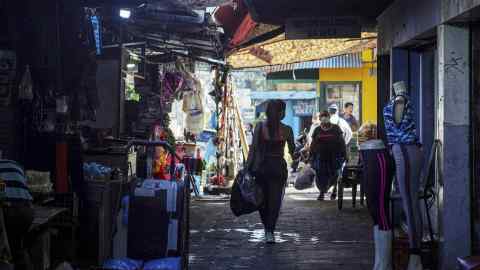 “Pakistan has a combination of Chinese and IMF support likely to come together unlike, say, Sri Lanka or El Salvador,” said Kevin Daly, emerging market debt portfolio manager at Abrdn. “They don’t have the same level of support that Pakistan has.”

While Pakistan has drawn on bilateral support in past crises, analysts said it might falter in its push to regain its financial footing due to political instability.

“We still have a baseline that Pakistan will get board approval for a staff level agreement, so that some IMF funding comes through,” said Krisjanis Krustins, a director at Fitch Asia-Pacific sovereign ratings team, adding that this would catalyse further bilateral and multilateral government funding.

However, he added: “We do have a negative outlook, and that is around the risk coming from politics and what that might do to the implementation of the deal.”

It's a question that's infatuated scientists for decades:...

A circular bitcoin economy in Guatemala is using...
- Advertisement -

The rush to find energy sources outside Russia...
Economy

Financial markets assess the health of a nation’s...
Economy

Executives at publicly traded US companies are becoming...

Where Do You Go To Start Learning About Bitcoin? – Bitcoin Magazine