Colombia’s first leftist government in modern history has targeted the country’s wealthiest residents and its commodities exports in a tax proposal that represents a significant shift for the traditionally conservative nation.

The proposed tax overhaul “should not be viewed as a punishment or a sacrifice”, Gustavo Petro, the country’s new president, said during his inauguration speech on Sunday, a day before sending the bill to Congress. “It is simply a solidarity payment that someone fortunate makes to a society that has enabled them to generate wealth.”

Some analysts described the proposed reforms as more pragmatic and less radical than feared when Petro was elected. However, they worry the reform may not be enough to tackle the fiscal deficit while funding the ambitious social programmes that he promised on the campaign trial.

The bill, announced on the first day of Petro’s government, seeks to raise an additional $5.8bn next year, about 1.7 per cent of gross domestic product. It projects an average of 1.4 per cent in annual new revenues for the next 10 years after that.

The proposal includes a tax increase for those making more than $2,300 a month — Colombia’s top 2.4 per cent, according to its finance ministry. It would also introduce an annual wealth tax on savings and property above $630,000.

The bill sent to Congress includes a 10 per cent levy on exports of oil, coal and gold when their prices are above an international reference of $48 per barrel for oil, $87 per tonne for coal and $400 per troy ounce of gold. The price of benchmark US crude oil is currently $94 per barrel, Colombian coal is averaging about $140 per tonne, and the price of gold is about $1,700 per ounce.

Oil and coal are Colombia’s top two exports, valued in 2019 at $12.9bn and $4.8bn, respectively, while gold exports totalled $1.6bn. A dividend tax on overseas investors who own shares in Colombian companies would double from 10 per cent to 20 per cent.

The additional streams of revenue are crucial to funding the generational change the president has promised voters. During his campaign, Petro, a guerrilla fighter in his youth, pledged to halt opencast mining and new oil and gas exploration contracts alongside a number of progressive reforms, such as funding universal healthcare and higher education and supporting wholesale land and pension reform.

A failure to deliver risks quickly angering his supporters, tens of thousands of whom took to the streets last year, initially to protest a tax reform proposal that would have raised VAT.

“As we say in Colombia, ‘campaigns are poetry but government is prose’, and the economic and fiscal reality is complicated,” said Luis Fernando Mejía, the executive director of Fedesarrollo, a Colombian economic think- tank.

The proposal comes as the Colombian economy faces headwinds. The fiscal deficit this year is projected to reach nearly 5.6 per cent of GDP and must be adjusted downwards by 2 points of GDP next year according to the pre-existing fiscal rule. Prices are rising quickly as the country emerges from the coronavirus pandemic — annual inflation is 10.2 per cent, the highest since 1999, while close to 40 per cent of people live in monetary poverty.

“Part of this reform will be allocated to reducing the fiscal deficit,” Mejía said. “Another part will go to spending, in line with the social programmes that the government has discussed.”

The country’s tax revenue is about 19 per cent of GDP, but just 5 per cent of the population paying personal taxes, according to the OECD. The average for OECD countries is 33 per cent.

Petro’s Yale-educated finance minister, José Antonio Ocampo, has pledged to tackle tax evasion and avoidance, saying that revenues would be increased by modernising Colombia’s collection agency. Over half of Colombia’s workforce is estimated to be in the informal economy.

Despite the challenges, some economists said that the reform bill could be a model for other progressive governments who have praised its proposed increase in capital gains taxes. 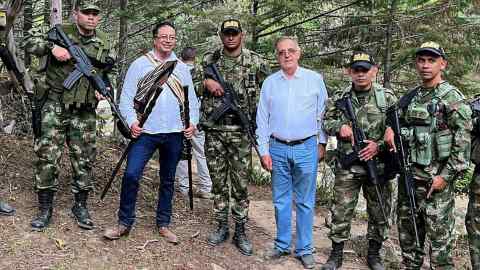 “In Colombia, the truth is that we have never had a reform that was focused on making the people who have the most pay,” said María Fernanda Valdés, co-ordinator of economic affairs at Friedrich Ebert Stiftung, a political foundation. “Almost always the attempt was made to make the middle class pay, such as by increasing [value added tax]. If it passes, it could be the first of a wave of similar reforms in Latin America.”

The bill requires approval by Congress, where Petro has a majority coalition made up of centrists from traditional parties as well as leftist outsiders. It is still likely to be amended by lawmakers.

Many of Colombia’s powerful business associations had on Wednesday yet to make formal statements about the proposed reforms. But certain provisions, such as a tax on sugary drinks, processed foods and single-use plastics, are likely to worry them.

Erica Fraga, senior analyst for Latin America and the Caribbean at the Economist Intelligence Unit, a think-tank, said that the presentation of a “reasonable” tax reform on Petro’s first day in office showed an attempt to secure quick wins in Congress.

“However, Mr Petro’s pragmatism will also force him to accept the dilution of his radical agenda,” leading to tension between his leftist allies and traditional parties, Fraga said. “The risk of political turbulence and social unrest when his honeymoon period with both Congress and voters ends remains high.”

The Health and Human Services Department has unveiled a public database that provides unprecedented access to information about...

A three-bedroom, three-bathroom home on Clearwater Lake in Pinewood has been listed for $1.3 million.  The 5,012-square-foot home is...

View gallery Emily Ratajkowski, 31, is no stranger to dating in the spotlight. The gorgeous model has gotten attention...

A contender for the greatest of financial commentary...
Economy

The Bank of England and UK Treasury on...

A three-bedroom, three-bathroom home on Clearwater Lake in...
World

View gallery Emily Ratajkowski, 31, is no stranger to...
Business

“This is the first time we’ve actually attempted...
Load more